There’s no question about it: veganism is going mainstream. Whether inspired by celebrity endorsers such as Bill Clinton or Anne Hathaway, moved by a powerful film such as Forks Over Knives, or simply enamored by the delicious vegan food choices available today, people everywhere are trying out the plant-based lifestyle. 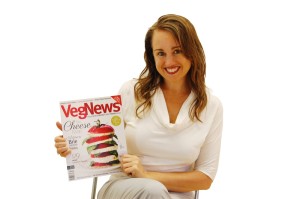 How did we get to where we are today? A combination of grassroots’ activism, the expert work of national animal advocacy groups, and advances in technology has propelled the vegetarian movement forward like never before. But I would also add a fourth influencer—vegan entrepreneurs. Working tirelessly to create a parallel economy that places ethics over profit, compassionate companies provide vegan products and services that normalize the veg lifestyle, showing that there needs to be no sacrifice when ditching meat and dairy. This force is critical to portraying veganism as accessible, practical, and normal.

So how does one become a vegan entrepreneur? Prepare yourself to work harder than you’ve ever worked before, realize that it may take a couple of years before your business is financially viable, but know that nothing is more rewarding than fusing your livelihood with something as meaningful and vital as veganism. In 2000, when my business partner and I launched VegNews, we had no idea what we were getting ourselves into. Thirteen years later, our business has taken on a life of its own, and it feels like yesterday when we were holding the very first issue in our hands.

Here are my top five tips for launching a vegan business:

Most likely, you’re part of the vegan community and have noticed a product or service not being offered—or not being offered to your standards. Discuss your idea with friends and family to gauge their excitement level for your business idea, and carry around a notebook to jot down ideas as they come up. After three months, if your enthusiasm for your business idea is still high, start to create an execution strategy.

There’s no rules about capitalizing a business, as success stories range from launching with $25 to launching with $25 million. After more than a decade in the (vegan) business world, I think it’s prudent to be lean no matter which end of the spectrum you’re on. And often times, a business that starts small and grows organically is far more fluid to changes in the marketplace than one that bursts onto the scene with a big budget and a (seemingly) airtight business plan.

3. Pull together your dream team.

Think about the advantages of bringing in a co-founder, as having someone with complementary skills can be critical to the success of your company. Entrepreneurs often think they can do it all, but specializing in areas where we perform best (with others doing the same) is a great strategy for growing smartly and efficiently. In addition, hire an attorney to form your business entity and partnership agreements; a bookkeeper to set up a financial system; and a social media guru to manage your online marketing.

What may be your most important pre-launch hire is a designer or branding agency. You can have the best idea in the world, but if it doesn’t look credible or desirable, it may not last in today’s competitive marketplace. Standards for packaging and websites have increased dramatically in recent years, and, as a vegan business, it’s even more important to showcase our products and services in a sophisticated and appealing way. Don’t skimp on this part of your business—it will pay for itself again and again.

5. Overdeliver in everything you do.

Whenever we hire new staff at VegNews, I always emphasize the importance of overdelivering on everything we do. Whether it’s providing top-notch service to our subscribers, giving our writers a stellar editing experience, or helping our advertising partners deliver their best campaign ever, I want the VegNews experience to be nothing short of phenominal. This is my mantra, and, for now, it seems to be working.

About The Author: Colleen Holland is the co-founder of VegNews Magazine. Join Colleen (and other vegan business experts) at the first-ever Vegan Professional Bootcamp this Sunday, February 24 in Berkeley. Future bootcamps are scheduled for Washington, DC, Chicago, New York, Los Angeles, and Austin.